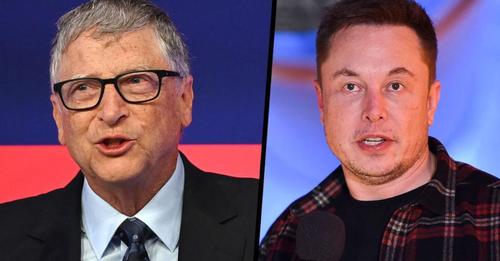 Bill Gates issues warning to the World about Elon Musk

When you look at Elon Musk’s accomplishments it’s hard not to be impressed. Musk is at the helm of SpaceX, Tesla, and is currently the world’s richest person with an approximate worth of $267 billion. But let’s not forget, he also has a strong social media presence – and that presence has a lot of influence. Just last year Musk put out just a few pro-crypto currency tweets, that caused Bitcoin to soar. However, Bill Gates has a warning about Elon and crypto, and he wants people to listen.

In a recently resurfaced interview, the philanthropist and founder of Mircosoft warned that the cryptocurrency market is very risky for anyone with less money than Musk, which as you know, is almost everyone. Gates says that the crypto bubble may burst and that investment returns could dwindle. These are losses that Elon could easily absorb.

Bill Gates Was A Prophet When It Came To Elon Musk- Yet The World Didn’t Listen
Speaking to Bloomberg in February 2021, Bill Gates stated, “Elon has tons of money and he’s very sophisticated so I don’t worry that his Bitcoin will randomly go up or down. I do think people get brought into these manias who may not have as much money to spare so I’m not bullish on Bitcoin. My thought would be if you have less money than Elon, watch out.”

Ironically, probably 99% of the world as of now has lesser wealth than Elon Musk. But shockingly, people have been investing in cryptocurrencies, NFTs, and the metaverse without considering the other side of the coin.[1]

One can easily see how Bill Gates’ words seem prophetic. In January 2021, just one month prior to the Gates interview, Elon Musk sent Bitcoin skyrocketing. And how did he do that? Simply by changing his Twitter bio to #bitcoin. Now, you need to imagine the scenario to fully comprehend how dangerous Elon can be. A single individual has the power to shift the direction of a cryptocurrency. If you had invested in Bitcoin, and Musk shared a couple of tweets where he slammed the cryptocurrency, your stocks would fall fast. Since cryptocurrencies don’t have a fixed exchange rate, it is very easy to lose all in a high-risk, high-reward goose chase.

The Modern-Day Tony Stark- With A Little Less Altruism
Let’s be honest about Elon Musk. The billionaire portrays the classic caricature of an eccentric billionaire. From the latest scientific gizmo, to space travel, this man has it all. His company Tesla has been the leading electric car company for the last 4 years. Musk has also ventured into space travel with his SpaceX, where the price of a single aircraft is significantly less than that of NASA. He also has his own satellite company, readily invests in cryptocurrency. With so much power vested in a single individual, can the world sleep easily?

In the recent invasion of Ukraine by Russia, Elon Musk had uploaded a series of tweets. And maybe they were quite tasteless due to the severity of the situation, but one can’t deny that he probably could do what he wrote. In a response to a satirical piece that claimed he would be delivering flame-throwing electric tanks, the billionaire stated- “Pshaw, how pedestrian! I was thinking more… space dragons with lasers.”[2]

In another tweet, he was publicly calling out Vladimir Putin, to a no-holds-barred boxing match. While he was joking, the fact that a man can get away with such outrageous tweets without any repercussion does speak volumes of the power he wields.

Elon Musk and Cryptocurrency- A Deal With Satan?
Bringing the topic back to cryptocurrency, Elon Musk’s tweets regarding DOGE coin, Bitcoin, and SHIB have not been received well by experts. William Quigley, the MD of Magnetic, recently informed CNN,

“Please don’t pay attention to what Elon Musk says about crypto because he is simply not an expert. I think for him it was more of a joke, but a lot of people, unfortunately, follow what he says. Maybe when it comes to energy-efficient cars look at what he does, but ignore anything he says about bitcoin and crypto in general.”

How can one forget February 2021,[3] when the billionaire referenced Dogecoin in a tweet and sent its market valuation reeling. “Dogecoin is the people’s crypto.” After this tweet, the crypto surged by 60%- despite it actually not being ‘people’s crypto”. In June, Bitcoin met the opposite when Musk put up a tweet- which didn’t have a sentence- in it. All it had was the picture of a broken-heart emoji, a couple discussing their break-up, and #Bitcoin.

When someone has so much power, they tend to let it get to their head. We are not saying that Elon Musk would be doing the same, but- why should one force the hand and take the risk?