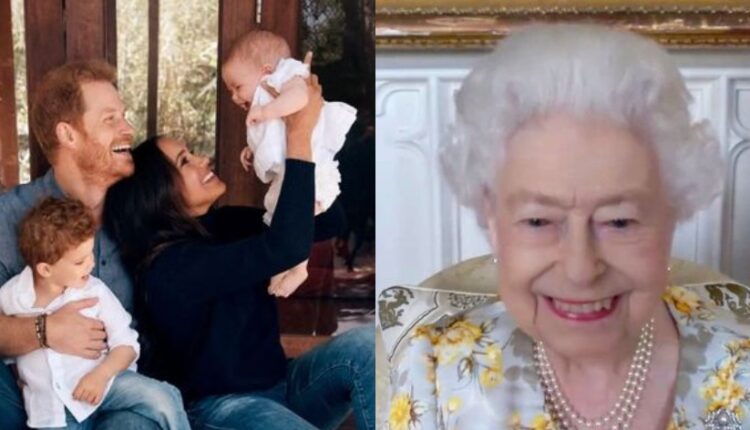 Prince Harry and Meghan have told the Queen she will get to see her great-grandchildren, Archie and Lilibet, “in the near future”.

The Duke and Duchess of Sussex made the promise on a whistlestop visit to London as they opened up the possibility that they will return from the US for the Platinum Jubilee.

The couple jetted into the UK from California on Thursday for a secret face-to-face meeting with the 95-year-old monarch – who has yet to meet her great-granddaughter Lilibet.

They also saw Prince Charles and the Duchess of Cornwall in a closely-guarded visit to Windsor Castle.

However they did not meet Prince William, who is believed to be on a skiing holiday in the French Alps this week with wife Kate and their three children – although they were aware of Harry and Meghan’s visit.

Prince Harry and Meghan Markle with their children Archie and Lilibet 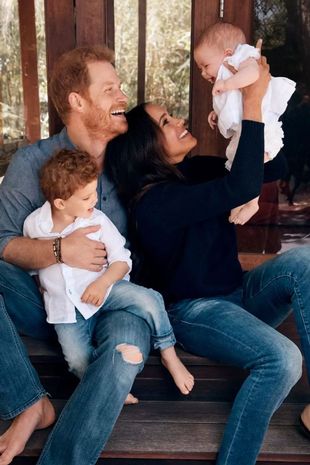 The Sussexes made their first joint UK trip since quitting royal life in March 2020 while en route to the Netherlands for the Invictus Games.

Senior royal sources have described the meetings as “incredibly warm and good natured” and “very cordial”.

The Duke and Duchess told Her Majesty their plan to return so the Queen can spend time with 11- month-old Lilibet and Archie, two, who are believed to be in the US.

The Queen has suffered a catalogue of health issues in recent months.

The Queen has never met Lilibet 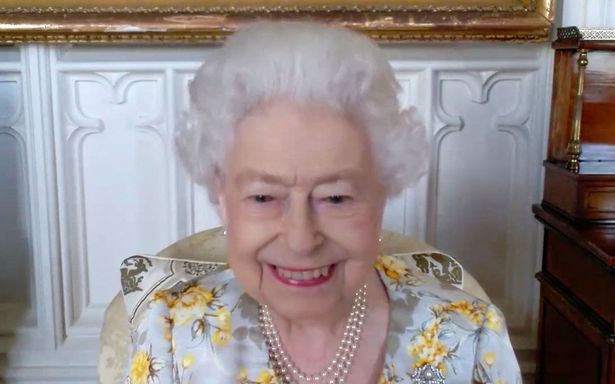 As well as an overnight hospital stay for an unexplained condition, she suffered from Covid in February and has had worsening mobility issues.

A source close to the Sussexes said: “Both the Duke and Duchess are very mindful the Queen is getting older and has had health issues associated with her great age.

“They have made it clear they are certainly planning to return to see the Queen with their family in the near future.”

The Queen’s record-breaking 70 years on the throne will be celebrated across Britain during a special bank holiday weekend from June 2 to 5.

The royals will unite for the annual Trooping the Colour as well as a special gathering at St Paul’s cathedral.

Meghan Markle at the Invictus Games 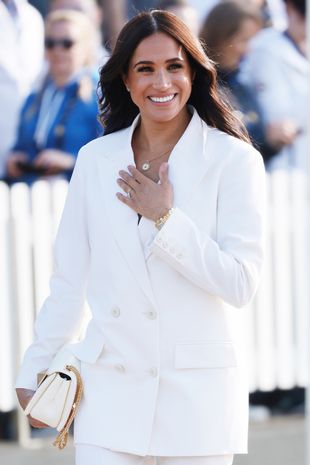 Harry and Meghan travelled to the Netherlands after visiting the Queen

The Queen also hopes to attend the Epsom Derby and the royals will also be at a special music concert outside Buckingham Palace for 10,000 lucky ticket-holders.

Our source said: “It’s certainly a possibility the Duke and Duchess could attend the celebrations.”

Harry and Meghan’s “clear the air” talks with the Queen and Prince Charles were the first time the Duke of Sussex had seen his grandmother or father since the Duke of Edinburgh’s funeral 12 months ago.

Their decision to stop off en route to the Invictus Games in The Hague was made “several weeks ago”, one source revealed. Harry is understood to have told the Queen about it in a phone call prior to Prince Philip ’s memorial service at Westminster Abbey last month, which he missed.

Harry had claimed it was too dangerous to return to Britain with his family, as he sues the British government in the High Court over what he claims is an “unlawful” and unfair” decision to strip him of his taxpayer-funded security when he quit royal life.

One senior royal source said of the Sussexes’ private meetings with the Queen and later Charles and Camilla: “There is very much a willingness as much as possible for everyone to come together for the Queen.”

A Palace insider remarked how there was “added significance” to the Easter meeting, saying: “The Easter period and Maundy Thursday is a period of togetherness and forgiveness and that is very much the collective wish moving forward.”

Relations between Harry and Meghan and the rest of the royal family hit rock bottom last year after the Sussexes’ bombshell interview with Oprah Winfrey. Meghan claimed the royals abandoned her when she was pregnant with Archie, leading her to consider taking her own life.

The couple also accused a senior royal of making derogatory and racist remarks regarding how “dark”-skinned their children would be.

The Queen issued a statement, revealing her sadness at learning of Meghan’s alleged mental health struggles, while suggesting that “recollections may vary” on other matters.

Harry has been in sporadic contact with his grandmother and father Prince Charles since then and is understood to have had “virtually no contact” with brother Prince William.

Despite the reunion, the family is said to be “increasingly nervous” about the contents of Harry’s planned memoir, which is due out this autumn.

Another source said: “The reunion is good news, but there is still much trepidation about how far Harry will go in his memoir which could completely undo everything. If Harry was to start mudslinging again there would be absolutely no chance of a reconciliation. Whether Harry or Meghan can be truly trusted remains to be seen.”

In January The Mirror revealed how Charles “offered an olive branch” to Harry by inviting his family to stay with him the next time they visit the UK. He expressed a “firm wish” to spend quality time with his grandchildren, having not yet met Lilibet and not seen Archie since he was six months old.

However, it is understood that prior to Thursday’s meeting relations have once again been “strained to non-existent” between father and son.

The Prince of Wales is also understood to have been “bitterly disappointed” over both Harry’s decision to take legal action against the Government and his refusal to return for the Duke of Edinburgh’s memorial service.

Harry, 37, and Meghan, 40, today departed for The Hague to the Invictus Games – the global multi-sport event Harry created in 2014 for injured service personnel.

Both are expected to make a speech at Saturday’s opening ceremony.

Last night they attended two VIP receptions, where they were protected by their own security teams and those of the Dutch authorities.

They were also followed by Netflix crews making a documentary about the couple as part of their £113million deal with the internet streaming giant.