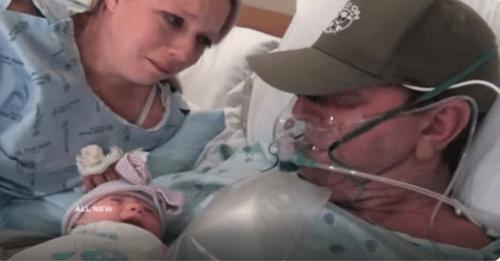 For 45 minutes, Mark Aulger held his newborn daughter named Savannah. That photo of that moment is the one that the now nearly nine-year-old Savannah has with her father, who slipped into a coma the day after her birth and left his life just a few days later. It was unexpected devastation to a family that had been given renewed hope just a month earlier.

In December 2011, Mark Aulger, 52, learned that after eight months of chemotherapy, he was c.a.n.c.e.r-free. His wife, Diane Aulger was pregnant with their fifth child and Christmas that year was full of joy. However, the new year brought heartbreaking news when on January 3, 2012, Mark was admitted to the hospital and he was diagnosed with pulmonary fibrosis – a result of chemotherapy.

Diane told ABC News: “We thought he could get on steroid treatment and oxygen and live for years,” . But that wasn’t the case. By January 16th, it became obvious that the treatments weren’t working, so Mark was given just one week to live.