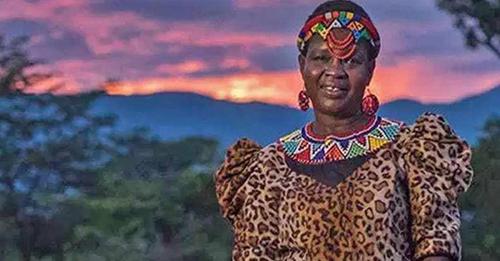 In the Southeastern African Country of Malawi, there is a female chief known as “The Terminator.” Since becoming Chief in 2003, Theresa Kachindamoto has annulled nearly 2600 child marriages and sent all of those girls back to school. (1)

The Female Chief Fighting To End Child Marriages in Malawi
Chief Theresa Kachindamoto is the tribal ruler of the Dedza District in Central Malawi. The country has one of the highest rates of child marriage globally, with half of its girls wed before the age of 18.

In Malawi, only 45% of girls remain in school past the eighth grade because of this, and 20-30% of maternal deaths are due to teenage pregnancy complications. The girls who survive pregnancy are then trapped in a life of poverty due to a lack of education and opportunity. (4)

Female Chief Kachindamoto worked tirelessly to have an actual law passed in the Malawi Parliament in 2015, making it illegal for anyone – girls and boys – under the age of 18 to be married.

“It is good that the law is on our side now, but enforcing it remains a big challenge. In many areas, people still believe a girl is ready to have sex and babies when she reaches puberty. We have to eradicate these old ways of thinking,” she said. (1)

A Zero-Tolerance Policy
Despite the new law, many child marriages continue to occur. Under what’s called “customary law,” a girl can still be married with parental consent overseen by traditional leaders. This means that subchiefs underneath her can still perform these marriages.

Four male subchiefs continued to perform these illegal marriages, so Chief Kachindamoto suspended them. She then made all chiefs sign a decree saying that they would not perform child marriages. The four male subchiefs who already had would only be reinstated once they confirmed that they had annulled the marriages.

A Woman Changing The Cultural Norms in Malawi
As a female chief, Kachindamoto is no stranger to adversity and defying tradition.

“When I was chosen to be the chief, there were no female chiefs within my area,” she says. “Since then, I have managed to convince the royal families to choose women; hence 55 women small chiefs have been selected during my term of chieftaincy.” (1)

Naturally, many people are opposed to what Kachindamoto is trying to achieve. She receives threats regularly, but she refuses to let them stop her from achieving her goals.

“Some have threatened me, saying things like, ‘You are still quite young. Are you ready to die?’ But I just tell them to go ahead and kill me, because it is the only way they will stop me from protecting our girls” (1)

As a mother to five sons, many think her crusade is because she has no daughters of her own. She said her position and mission are all thanks to her father, who understood the power of educating girls.

Her Father Prepared Her to be Malawi’s First Female Chief
The former chief sent her away to boarding school when Kachindamoto was a girl. At the time, she thought he was cruel for sending her away. Now she understands this was an act of love and that she was truly blessed.

When her older brother, who had taken over the role as chief from their father, died, Kachindamoto was chosen to take his place. (1)

“Even though I had older siblings, they said they picked me because I was the most educated and successful. It was my duty to agree,” she explains. (1)

She quit her office job in another city and returned home, only to be shocked by the number of teenage girls carrying around babies instead of going to school. That was when she made it her mission to end this outdated practice and make a better future for everyone in Malawi. (1)

“My opponents here say I am defying our traditional culture,” she says. “But in my view we are redefining it.” (1)

Poverty At Play
Many of the child marriages that happen in Malawi are due to poverty. Parents will pay their debts by selling their daughters to be married. Unfortunately, this leaves the young girl with very few options or opportunities for her life, and the cycle of poverty continues. (6)

Kachindamoto knows that when you educate girls, their ability to earn money and become self-sustainable goes up. They can then contribute to the economy and raise educated children who will do the same. Educating girls has the power to improve an entire country’s economy. (1)

“When girls are educated, anything is possible.” the female chief says. (6)

She believes this so strongly, that she pays many girl’s school fees out of her own pocket so that nothing, not even a lack of finances, can prevent her from getting an education. (1)

Female Chief Kachindamoto’s Goals For Malawi
Not only is she actively fighting to terminate and prevent child marriages, but she is also working to improve education for girls and help women establish small businesses. She advocates around the country for the importance of education for both boys and girls and the dangers and complications of teenage pregnancy. (1)

She put an end to traditions such as kusasa fumbi, which means “sexual cleansing.” Pubescent girls, widows, and women who have had an abortion are sent to a three-day camp where they are forced to have unprotected sex with hired older men called “hyenas.” The purpose is to “cleanse them of evil spirits” and prepare them for marriage. In reality, they only increase the risk of transmitting sexual diseases. (1)

“We have eradicated these camps entirely in the Dedza District,” says the female chief. “If one took place today, I would know about it in the blink of an eye.” (1)

How does she know? Through her network of “secret mothers.” These are older women who act like Kachindamoto’s personal watchdogs in every village under her jurisdiction. Having at least one in each village, they inform her of any child brides and other malpractices. The Chief then sweeps in, terminates the marriage, and rescues the girl. (1)

“Our job is to keep our eyes open, listen to rumors, and ask casual questions all the time,” says one of Kachindamoto’s secret mothers. “People think it’s normal for older women like me to stick our noses into everyone’s business, so we arouse less suspicion.” (1)

How She Protects Child Brides
In each village, she has four female volunteers that act as caregivers to rescued child brides. They get the child tested for HIV and other diseases. If she is pregnant, they take care of her through the pregnancy. After giving birth, Kachindamoto requires her to stay home with the baby to breastfeed until the child is six months old. (1)

Then, they send her back to school. Either her older family members or community members take care of her children until the girl has completed her studies. (1)

Still A Long Way To Go
Kachindamoto has done an incredible job so far at fighting and preventing child marriages in Malawi. However, it is an ongoing battle, and it will take a long time before the act truly becomes a permanent part of Malawi’s past. (1)

The former child brides face social stigma when they go back to school. They are sexually targeted by older teenage boys who view them as easy prey. (1)

The financial burden on Kachindamoto and on families whose daughters are returned to them is a challenge. The Chief knows, however, that it will all pay off in the end. (1)

“Eventually, it is my dream to have college scholarships and job-training centers to empower girls to fulfill their potential, so we will keep working toward that goal.”

My boyfriend refuses to divorce his ex unless I pay for it. Is this relationship…

Parents abandon their 3-Day-Old Child, leave her a note…