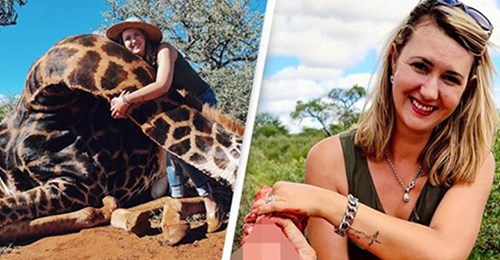 Trophy Hunter Defends Spending $2,000 To Shoot Giraffe And Pose With Its Heart

A South African trophy hunter is receiving a hefty amount of backlash after killing a giraffe, cutting out its heart, and posing with it in a photo she posted to Facebook. She has gone on to defend her position, claiming that trophy hunting benefits the economy and the animals. (1)

Trophy Hunter Kills Giraffe, Cuts Out Heart, And Poses for A Photo
For Valentine’s Day, Merelize Van Der Merwe’s husband gave her a gift she had always wanted: The opportunity to shoot a giraffe. Her husband paid $2000 for his trophy hunter wife’s experience, which she promptly bragged about on Facebook. (2)

She says they were supposed to have a romantic weekend away at a five-star hotel, but when the opportunity came up for her to hunt a 17-year-old giraffe, they changed their plans. (3)

After killing the bull, she posted a couple of photos on social media. One with her posing with the giraffe’s dead body, the other holding up its heart, which she cut out of his chest. (1)

“Ever wondered how big a giraffe’s heart is?” she wrote in her caption. “I’m absolutely over the moon with my BIG valentines present!!!” (1)

She Believes Animal Rights Groups Are Like The Mafia
Merwe fully believes that trophy hunting is an important sport. She says that it creates work for people, provides meat for locals, and helps strengthen herd genetics. (1)

“I couldn’t believe my eyes, BIG BLACK and OLD, so old that he was way over his time and the owner didn’t know if he will last another 3 months!!!” she described the giraffe in another post. (2)

The trophy hunter, who has killed over 500 animals, says that culling older animals like this allows younger ones to take over the herd and strengthen the herd’s genes. She claims that trophy hunting has helped to bring back several species from extinction. She also says that it generates income for conservation groups. (3)

This is, of course, far from the truth. Trophy hunters pay huge sums of money to kill animals. This provides an incentive for the hunting business and encourages people to breed animals solely for the purpose of the sport. (1)

“Trophy hunting is a cruel throwback to a colonial past, and the targeting of particular animals (usually those with the most impressive traits such as the biggest tusks or the darkest manes) disrupts animal societies and has knock-on effects for populations and ecosystems that we are only just beginning to understand,” says anti-hunting organization Born Free. (1)

A Vulnerable Species
The International Union for Conservation of Nature lists giraffes as a vulnerable species. Teetering on the brink of becoming endangered, the trophy hunting business does nothing but put them further at risk for extinction. (2)

Many groups believe that trophy hunters are really only doing it to display their socio-economic status despite what they might think. The technology and weapons used by trophy hunters make the sport no longer require impressive physical capabilities or bravery. It is purely to show off wealth. (3)

Her Facebook post has been heavily criticized, with commenters telling her she should feel ashamed, not proud, of what she has done. (2)

These 5 Questions Appeared In A 1950s IQ Test. Can You Answer At Least 1 Correctly?

If you can solve these equations you have the IQ of a Genius!

Eye Test: You Have 30 Seconds To Find All The Odd Letters Out!