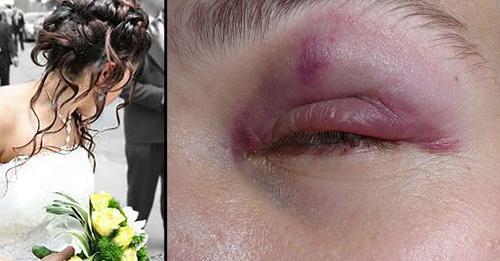 The photographer caused a riot when a bride and groom were about to take each other as husband and wife. And he’s now a hero for all the right reasons. The wedding photographer, Onur Albayrak, was covering a ceremony at Malatya’s Turgut Özal Nature Park in Turkey on July 5, 2018. When he saw the bride for the first time, he found it strange that she looked quite young and didn’t really seem like an adult.

According to Turkish newspapers Hurriyet Daily News, Turkish wedding photographer Onur Albayrak was so shocked when he realized the bride was a young 15-year-old girl that he not only refused to participate but also decided to stand up for the young teen, who was reportedly “trembling”.

It ended with Albayrak punching the much older, adult groom right in the face, leaving him with a broken nose. “The groom had come to my studio some two weeks ago and was alone,” Onur said. “I saw the bride for the first time at the wedding.”

The photographer noticed that the bride did not look old enough to be getting married and wanted to make sure she was an adult before he started shooting the wedding.

However, when he realized that the girl was only 15 years old, Albayrak was furious. He noticed that the young girl trembling with fear. Albayrak, understandably quite disturbed by the age of the bride got into a heated argument with the groom, who was much older than the minor. According to Daily News, the argument ended in a massive fight that resulted in the photographer assaulting the groom.

The groom picked a fight with Onur as he tried to leave, saying that it would be a violation of their contract if he refused to take pictures of the wedding, as reported by CBN News. But Onur didn’t budge and their heated argument turned into a brawl. A brawl that ended with the groom getting a broken nose. The photographer has no regrets about the turn of events and even confirmed on Facebook that the reports were indeed about him.
If he had to do it again, he certainly would. Onur wrote, “I wish this had never happened, but it did,” Albayrak wrote in a post on his Facebook page. “And if you were to ask me if I’d do the same thing again, I’d say ‘yes.’”

People who came to know of his heroic act praised Albayrak for his action. “Very often for social reasons people don’t want to make a scene so I am really happy he did this. He should be hailed as a hero, we need more people like this,” said Yasmeen Hassan, global executive director of campaign group Equality Now to Reuters.

In spite of numerous guests present at the ceremony, only one person showed the courage to voice his concern. However, it is not known if the family had gone through with the wedding regardless of the photographer’s protest.

Though the Turkish law prohibits the marriage of anyone under the age of 18, reports by various human rights violation show the evident increase in the number of such marriages. Though it is technically illegal in the country, many people in Eastern Turkey accept it as a part of their culture. Albayrak set a great example for the society and has inspired people to stand up for what they believe in.