This Strange Script Was Invented To Take Notes Easier, But To Many It’s Unrecognizable - Daily Net 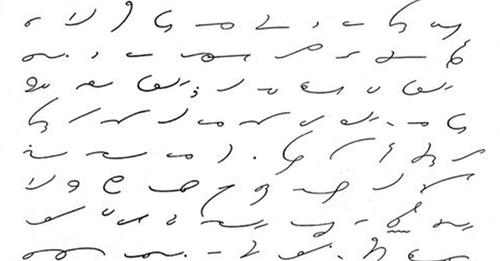 This Strange Script Was Invented To Take Notes Easier, But To Many It’s Unrecognizable

There are a lot of things that baby boomers remember that the generations after them have never heard of and will likely never really understand (using typewriters anyone?). One long-lost mainstay of the baby boomer generation is something called Gregg’s shorthand.

Baby Boomers Are The Only Generation That Will Remember This Style of Writing
Baby boomers grew up and began their careers in a time when work and note-taking were either done via the typewriter or by hand. Anyone who has ever tried to take notes while someone else is presenting knows how challenging that can be. In order to keep up with human talking pace, baby boomers used a style of writing called Gregg’s shorthand. They were the last generation to do so.

Gregg Shorthand
John Robert Gregg invented this form of writing in 1888. It is sort of like cursive writing (another forgotten skill for today’s generations), only faster. It is based on a series of elliptical figures so that the writer can accurately and quickly record dictation – aka write down what someone else is saying. Gregg created it to dictate the sounds of the words rather than writing out each word in its correct spelling. It is based on the phonetic system rather than our actual written language. Students and secretaries used this version of writing across the globe to take notes in class or quickly scribble out the details of someone’s message over the phone.

All But Forgotten
Of course, anyone who is a member of the younger generations, such as generation x, the millennial generation, and generation Z, has no hope of ever understanding something written in Gregg’s shorthand. Likely there are many baby boomers who also can no longer read it or never learned how to use the writing style.

As new technologies developed, this style of writing slowly and yet all at once became something that no one needed anymore. Mechanical dictation machines took over and from there personal recording devices and today even newer tech that allows you to take notes easily and accurately.

In university and in most office spaces, lectures and presentations come along with a visual slide deck that has most of the information there for you. If you need to, you can quickly type out a few notes on your computer in the “notes” section on the slides or scribble them in a notebook. When I was in university, it wasn’t uncommon for students to record lectures so that they could go back and listen to them again. Instead of focusing on taking notes, they could just listen intently and try to think critically about what their professor was saying.

A Thing Of The Past
Though Gregg’s shorthand may not be something that the majority of people can use or understand nowadays, it is pretty cool to look at. Myself included, it looks like some kind of ancient Sanskrit. Despite that, there are people today who can still read and write it. That’s pretty unique.