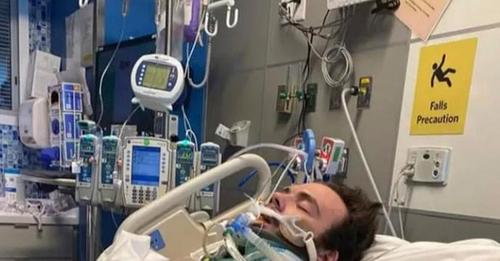 We usually see trained professionals coming in to rescue people in times of danger. But what happens when time is running out? It’s at that exact moment when normal humans step up and become heroes. This is the story of Nicholas Bostic, a 25-year-old pizza delivery man, who decided to do just the same. The young adult had jumped into a Lafayette house that was on fire, to rescue the individuals trapped inside. Unfortunately, he couldn’t escape entirely unscathed himself. He has sustained smoke inhalation and a few injuries and is on his way to making a full recovery. And it goes without saying, his efforts have led to donations coming throughout the world to aid his recovery. A GoFundMe page that was set up has already received over half a million dollars.

Bostic receiving treatment at the hospital. 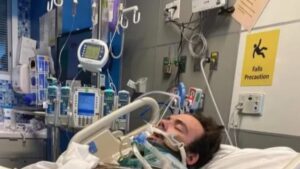 The cousin of this hero, Richard Stair, mentioned, “This kid is the real deal. Sadly, he has some serious injuries and will need help during his recovery.”

Bostic had been minding his own business on that fateful night when the event took place. He was simply filling his tank on the 11th of July when he saw a two-storeyed house in Indiana shoot up in flames. Intending to call 911, he came onto the driveway- only to realize he had forgotten his phone back home. He had only two options left to him- to get help or to resume them himself. Choosing the latter, he raced inside the house.

Speaking from the hospital later, the young hero stated, “I shouted, ‘Anybody here? Get out! Get out! Fire!”

Young Hero Pizza Delivery Man Rescues A Bunch Of Individuals From A House Fire
When he heard a couple of voices upstairs, he sprung to action and saved the lives of four occupants. After depositing them safely outside, he went inside and grabbed the 6-year-old girl- as mentioned by the Lafayette Journal and Courier. In order to escape the fire, the man had to jump from the second-floor window with the kid cradled safely. According to a body cam video from the police, one could see the poignant action that the man had taken. But, he was not without his injuries. “I need oxygen!” Bostic shouted after a tourniquet was applied to his arm.

Here’s the video to go along with the story. pic.twitter.com/TvZ5wzCg1f

Even when he was on the curb trying to inhale oxygen, his main concern was for the kid. “Is the baby okay? Please tell me that baby’s okay.” The officers and the first responders on the scene stated that the child had been rescued and was completely fine. All she had to show for the ordeal was a cut on her foot. Body cam footage also heard a police officer mention, “You did good, dude.” Reports read that officials will honor the young man during the National Night Out next month. This is the time of the month when all the local communities celebrated their police departments.

Tony Roswarski, the Mayor of Lafayette, the Police Department, and the Fire Department of the city have decided to recognize the gravity of Bostic’s rescue. This will have a public showing at a Lafayette Aviators game on the 2nd of August. Incidentally, all the proceeds from the ticket sales have already been donated to an online fundraising campaign for Bostic. According to police reports, the fire began on the front porch and was a result of ashes being dumped into a bucket without being extinguished completely.