Rare biracial twins prove that love knows no color: “You can’t look at one and not love them both” - Daily Net 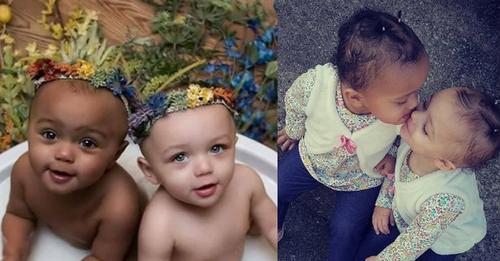 Rare biracial twins prove that love knows no color: “You can’t look at one and not love them both”

“You can’t look at one and not love them both.”
When Twin sisters Kalani and Jarani Dean go out, they’re often met with looks and it’s just not because they’re super adorable. Accordingly, Kalani has fair skin like her mother, who is white, and Jarani has brown skin like her dad, who is black. They are not just twins, they’re biracial twins. The twins’ mom, Whitney Meyer, said she considers the girls a symbol against racism and a sign to “love everyone equal.”

“You can’t look at one and not love them both,” she told TODAY. “They’re the same girl, just different colors.” The baby girls were born on April 23, 2016, in Quincy, Illinois. Meyer still remembers how surprised she was when she gave birth to them.

“Kalani was as white as can be. I was just in denial, because you know the odds of this?” she said. “I would never think I would have a black and white twin. That’s why I asked if she was albino, because she was just so white.”

Tomas Dean, Meyer’s boyfriend and the father of the twins, was just as surprised.

“I was like, ‘Yeah, she’s a little light,’ but I thought maybe babies are that way when they’re first born. But then a couple of minutes later, her sister came out a little darker,” he said. “In a million years, I never thought I’d have a girl with blue eyes. I didn’t think I could pull that one off!”

Meyer said she usually dresses the girls in matching outfits.

“They look alike in their smiles, but I have to dress them the same because nobody believes that they are twins. I mean, nobody,” she said. The twins were born to the couple two years after a rather tragic accident. In 2014, Meyer’s 2-year-old son Pravyn drowned while he was in his daycare service provider’s care. Meyer said Jarani is the spitting image of Pravyn, who had darker skin like his dad, while Kalani looks like her older Caucasian brother, Talan, who reads to the girls every night.

“He’s an amazing big brother,” Meyer said. Scientifically, there are multiple possible reasons for Kalani and Jarani to look this different. “The physical traits you can see in a person are just a very small sliver of the genetic diversity across human populations,” said Dr. Bryce Mendelsohn, a medical geneticist at the University of California, San Francisco. “A lot of times we only focus on the things our eyes can see, but what we see is a tiny tip of the iceberg of the actual genetic diversity in everyone. When you flip a coin eight times, sometimes it’s going to head all eight times. And it’s kind of like that when you have a bunch of genes. They’re all randomly shuffling, and you can get all kinds of outcomes.”