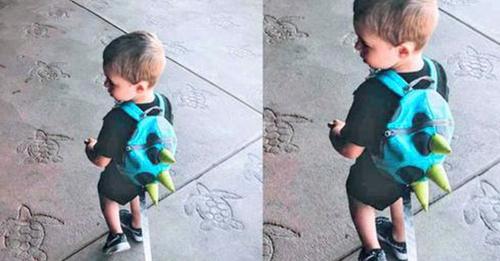 Mom defends putting her kid on a leash for safety 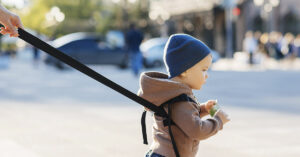 Children’s safety is a large priority for most parents. Features like car seats, covers for electrical outlets, choking-hazard-free toys, and the like are typical safety measures. But one has been debated and even hated for a long time: a child leash, also called a child harness. However, one mom speaks in favor of the tool, saying she chooses safety over anything else.

Mothers Explain Why They Use a Child Leash
In her post on Love What Matters, Desiree Hoye admitted, “Before I became a mom I would have been the person that said, ‘I will NEVER put my child on a leash, he’s not a dog!’ …and then I became a mother.” She receives the comments, the side glances. She even had someone say behind her back, “Look at her putting her kid on a leash…how terrible.”

But Desiree points out the leash protects her son. Children run off and get lost, children can get abducted walking with their parents, children can get injured in a matter of seconds. “Today and every day, I choose safety because I love my children more than anything in this entire world. I will gladly take a few awkward looks from strangers over never seeing his precious face again.” 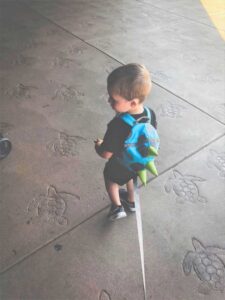 Desiree Hoye’s son using a child harness
Image Credit: Desiree Hoye | Love What Matters
Similarly, other mothers defend child leashes and harnesses. For instance, Laurel Niedospial used to hate the idea of parents treating their kids “like a pet” and using a leash to “check out” and not pay proper attention to them. Then she had her son, who is anti-hand holding and pro-running off. He also had issues with language development and didn’t comprehend the importance of the words “no” and “stop.”

As she wrote on Pop Sugar, “There’s nothing quite as terrifying as walking with a toddler who likes to suddenly bolt onto a train platform. Those one-second mistakes could be deadly. Unwilling to risk it, and unwilling to stay inside and wait until he was a better listener, the backpack with a leash became a thing, and it was life-changing.” Slowly, he began to understand instructions and didn’t need the backpack soon after he turned two.

Experts in Favor of the Child Leash
Child psychologist Tina Bryson further explains why some parents choose to use a child leash. “A lot of times the parents who are using it are using it because it’s based on a child’s behavior that they’ve seen,” said Bryson.

Similarly, family psychologist Kristen Howerton says the value of the harness is all about safety. “You only use a restraint like that when it’s a safety issue. You don’t use it at the park, You don’t use it when they’re playing in the backyard. It’s a time when you’re getting from A to B and making sure everybody is safe.”

The big question is the potential psychological ramifications of child leashes. The idea can seem humiliating, so how would that effect a child long-term?

“As a child therapy expert, my sense is they don’t cause any real psychological harm and that our strong reactions to them are more about cultural norms than about any actual or lasting effects on the child’s psychology,” said therapist Brooke Sprowl, LCSW. “Of the scarce research that has been conducted, none suggests that child leashes do cause physical or psychological harm.”

How to Use a Child Harness Safely
However, a child harness has to be used correctly to prevent any negative effects. There are important guidelines to follow. For instance, parents should consider all methods of maintaining safety for children, especially for those who are impulsive or have special needs. Is a leash really required in this situation? While a harness might help a younger child, an elementary-aged child might prefer something different.

The way a parent uses a leash is also important. Shelli Dry, a pediatric therapist, says that pulling or tugging on the tether can “lead to injury and harm to the child.” She added, “Safer alternatives to the wrist tether would be the harness backpacks or a walking handle in which the child learns to hold a loop or plastic handle.”

But above all, a child leash is meant help children learn to stay beside their parents in public. “The parent should express the loving desire to keep their child close by at all times,” said Dry. “When the child learns to walk alongside the parent, then the use of the tether can be faded. In other words, use of a tether when used short term and in a loving manner as a teaching tool and for safety in a young child should not have a negative effect on the child.”
The Stigma
However, child leashes and harnesses are commonly looked down upon. Parents who use them have the stigma of being lazy, cruel, or unable to discipline their children. Those who choose to leash face these judgments wherever they go. Child psychologist Jennifer Hartstein laments, “Parents are often judging one another rather than supporting one another. It would be so great if parents could use the situation as a discussion point rather than a divisive one.”