Black Couple Fosters a White Boy That No One Wanted to Adop: ‘Love doesn’t have a color’ - Daily Net 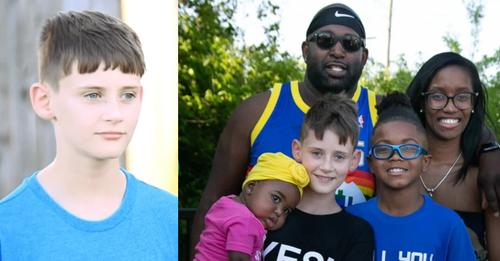 Black Couple Fosters a White Boy That No One Wanted to Adop: ‘Love doesn’t have a color’

A foster boy finally found his forever home. After his second adoption did not materialize, his best friend’s family decided to adopt him. Andrew, who was 10 at the time, had been in state custody since the age of 6, when his parents’ parental rights were terminated.

“Andrew has four siblings and they were all adopted right away,” Dominique said in an interview with TODAY Parents. “During his first week with us, he sat in his room with the door closed and looked at old pictures. He didn’t want to talk.”

“People would read his file and get scared away. But I knew he was a good child who had experienced a lot of trauma.”, Dominique added.

One day, his foster brother Joc asked if he wanted to play video games. Andrew agreed, and the two of them bonded over the shared interest — and an obsession with Pop-Tarts. “They’ve been best friends ever since,” Dominique revealed of the boys, who are now finally brothers.

Little by little, Joc’s friendship helped Andrew come out of his shell. Over the following two years, he opened up to his foster family. So when two adoption attempts didn’t work out, Dominique and Kevin took it as a sign.

In June, they surprised the 12-year-old by wearing matching shirts, asking him to join their family forever. Of course, Andrew said yes! Dominique noted that in the beginning, Andrew would “scream and behave badly” to try to push them away.

“He’d start shouting, ‘Just let me move out!’ But I refused to give up on him,” Dominique said. “I was like, ‘We are going to get you together.’”

Andrew officially became a Gill in July! With love and consistency, the Gill family did just that. Andrew has learned to control his emotions and has not had an outburst in over a year. But the Gills still get a lot of looks when they’re out in public.

“Because Andrew is white and we’re Black, people will stare at us,” Dominique said. “They’re confused.”

Race has never been an issue for Andrew or his adoptive family. He checked the “no preference” box when he was asked about his race preference for his foster parents.

“Love doesn’t have a color. (Andrew) is our son just like Joc is our son,” Dominique told TODAY Parents. “He’s a part of us.”