'I told my son, 3, the truth about Santa - I respect him enough to be honest' - Daily Net 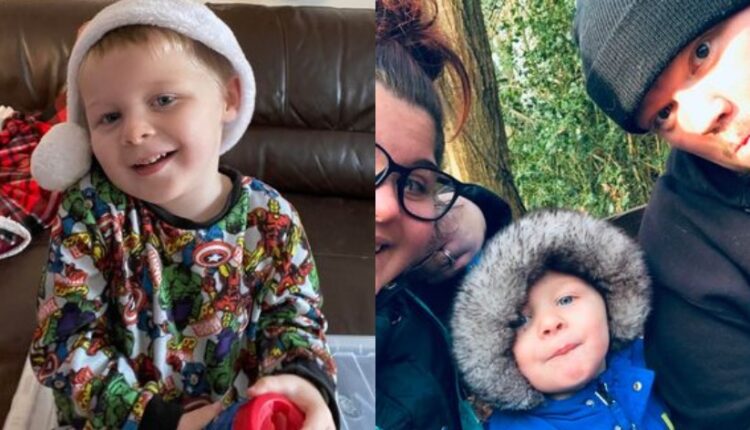 ‘I told my son, 3, the truth about Santa – I respect him enough to be honest’

Little Jax Taylor, three, is already talking about putting carrots out for the reindeer on Christmas Eve this year and it’s clear he’s just as excited for the big day as all other kids.

But unlike his peers, there’s a difference in Jax’s anticipation – he knows the truth about Father Christmas.

His mum, Florence, has always told Jax who really brings his presents, and she insists her admission hasn’t taken away the magic of Christmas.

Flo, from West Sussex, raises her son using the Montessori parenting method – described as a relaxed approach which allows toddlers to play freely.

The style, developed by Maria Montessori, doesn’t punish tots for being naughty, and instead focuses on their need to learn through playing without intervention from parents.

Speaking to The Mirror, Flo said: “The Montessori approach to parenting is about following a child’s interests and developmental needs and meeting them there.

“Preparing the environment for them to be independent in all areas, including learning and practical life skills.”

Little Jax has been raised knowing the truth about Santa

Flo claims Jax is able to cook with minimal help

She added it’s important to have “huge respect” for the children, who are “amazing little beings.”

Flo, who shares her parenting tips on her Instagram @montessoraus.mama, said it’s important to respect the child’s autonomy by letting them do things independently and not interrupting when they’re concentrating on play or work.

Instead of shaming the child or giving them a ‘time out’ when they’re misbehaving, Flo said she uses “positive active discipline” instead.

“It’s a child led positive approach that I think can work for everyone,” she said.

Following these guidelines, Flo has allowed Jax to make his way around the house, learning how to do ‘grown-up’ things that most kids wouldn’t even think about.

From the age of two her tot was making cups of tea, putting on loads of laundry and even making lasagne with very little help.

He has also ruffled feathers among Flo’s Instagram following for using real kitchen knives to carve a pumpkin for Halloween.

She described: “He’s started to gain an interest in writing and he’s loving working with tracing letters and matching objects to letters by their phonetic sound.”

The mum praised her son’s ability to concentrate for long periods of time, compared to some of his peers who can’t sit down and work on the same task for anywhere near as long as Jax can.

She added she can see maturity and initiative in her young son, compared to some other kids.

“As it’s cold and flu season, you’ll see kids with snotty noses and wiping it all across their face with their sleeve or being forcefully wiped off by an adult,” she said.

“Whereas Jax will go and get a piece of tissue and clean up his own nose without any intervention from me.”

Flo is such a big believer in the method that she also writes a blog about how she’s raising her son.

When it comes to the festive season and the magic bearded man in a red suit who visits on Christmas Eve, Flo applies the Montessori way of thinking as she would in any other aspect of Jax’s life.

Maria Montessori observed over 100 years ago that children under the age of six cannot differentiate real and fantasy, Flo explained.

“What this means is if you tell them Santa is real, he is as real to them as an ant on the pavement. They believe wholeheartedly that is truth because they’ve heard from their safe person (parent).”

Therefore, Flo prefers to tell her three-year-old son that Father Christmas isn’t real – which she insists doesn’t ruin the magic of Christmas.

“If anything I’ve made it sustainable by not having to break his trust in me when he inevitably would find out [about] Santa’s lack of existence anyway,” she said.

In the Taylor household, Flo says she focuses on giving, which is what Christmas is all about. Jax still makes festive biscuits (largely on his own), and the family still reads books and listens to songs about Father Christmas – but Jax knows it’s all make believe.

When he’s older, Flo says she wants to introduce her son to the original story of St Nicholas.

Despite knowing the truth about Father Christmas, Flo says Jax wants to play pretend this year and prepare for Christmas Day as if Santa is paying him a visit.

“We will make reindeer food, get some gifts from Santa, leave milk out for Santa etc.

“But he’s aware that it’s just make believe and that Mummy and Daddy buy the presents.”

Flo says the game of pretending Santa is real brings the family closer together, meaning she and her partner are “in his imagination with him.”

Despite not believing in Santa, Jax still loves to get into the festive spirit and bakes Christmas biscuits (

She said: “It’s all about respecting him enough to be honest, but still following his lead.”

The loving mum added her son is respectful of other kids’s beliefs and doesn’t spoil the story of Santa for them.

“He has a friend he plays with almost everyday who fully believes in Santa. For me, it’s more about teaching him to respect others beliefs rather than question it.

“It’s not this big secret he needs to keep, that’s a lot of pressure for a kid. It’s just something he doesn’t believe in that others do and that’s okay.

“He hasn’t told his friends Santa isn’t real, he has stayed quiet when they’ve discussed Santa or kind of spoken about Santa but not his lack of belief in Santa. If a child directly asks him if he thinks Santa is real, he would probably say no. And I don’t see a problem with that.

“In fact I think this is a great life lesson on respecting others beliefs, besides your own.”

Describing her rationale for not teaching her son to believe in Santa, Flo says that building trust with your children is key for their development.

“When your child is older you don’t want that trust to be severely broken and damaged, because that will stay with them forever that you did lie to them,” she said.

However, she said the main reason she’s using this method with her son is to understand where Jax’s brain is in terms of development.

“Right now, everything is absorbed into his mind like a sponge as truth, regardless of [whether it is true].

“So I choose to give him truth until he reaches an age developmentally where he knows some things are true, others are not.”

Although Flo advocates for the Montessori parenting method, she thinks all parents should do what’s best for them and their kids.

“This is what works for us. It doesn’t have to work for other people.

“But should parents want to take this approach, rest assured it does not take away any magic from Christmas for little ones.

“I think do what works for you and what aligns with your beliefs – this is ours.”