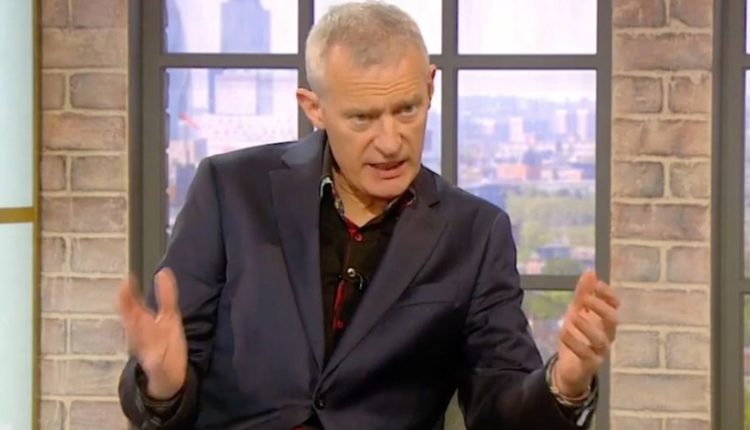 Jeremy Vine has been criticised for debating the diversity of Prince Philip’s funeral guests.

The Queen’s husband Prince Philip, Duke of Edinburgh died at last week at the age of 99 in the early hours of the morning at Windsor Castle.

The Duke’s funeral will be held on Saturday (April 17) at Windsor Castle in a smaller ceremony than previously planned due to the Covid-19 pandemic.

In a discussion with broadcaster Shay Grewal on his show on Thursday (April 15), Jeremy questioned the diversity of the guests in attendance at the funeral event.

Vine said: “Just on another point Shay, you’ve just made me think of this because of your lovely greeting to ‘the very diverse communities in this brilliant country’.

He noted: “I’m just trying to think whether there’s anybody of colour in there and I don’t think so.

“Is that…Do you think that’s a problem?”

The questioning of the issue drew complaints from viewers on social media.

One person wrote on Twitter : “Really! you do know there’s a limit on numbers permitted due to covid. Close family only. Meghan can’t be there because of her pregnancy so how is it racist.”

Another viewer penned: ” @JeremyVineOn5 stirring up racial tensions again. Of course the thirty people going Prince Philip funeral are going to be white they are all his family. If it was a full funeral it would be completely different because of the commonwealth leaders. Very poor #JeremyVine “.

Meanwhile, another social media user argued: “What is wrong with Jeremy Vine – it’s a family funeral with only 30 close family attending! So what’s the aim on comments on the colour of the mourners??

“Doesn’t help anyone but hey, anything for ratings! Just so poor #jeremyvine#jeremyvineon5#PrincePhilip “.

Finally, one person concluded: “Can’t believe that a small (not very private) family funeral is being turned into a debate about the ethnic mix of mourners by Jeremy Vine”.

Shay herself responded the question by saying: “No, I don’t think it’s a problem at all.

“At the end of the day, the Royal Family are a family and so if someone passes away you are going to have the most beloved members of your family there and that is the case when it comes to this funeral.”

The broadcaster also discussed the much-publicised absence of Meghan, Duchess of Sussex, who is not attending due to medical reasons related to her current pregnancy.

Shay said: “I know what you may be alluding to and some people have been talking about it on social media and that’s the fact that Meghan is not going to be there and, of course, Prince Harry is and that’s because she’s pregnant.”

“I think at the moment what we all need to focus on is the fact that a family is mourning. They have lost the patriarch in their family and, of course, we have lost the Duke of Edinbrugh.

All thirty of the funeral attendees are white and the majority are members of the British Royal Family.

The Queen will, of course, be in attendance, along with hers and the Duke’s four children and their spouses: Charles, Prince of Wales and his wife Camilla, Duchess of Cornwall; Anne, Princess Royal and her husband Vice Admiral Timothy Laurence; Prince Andrew, Duke of York; and Prince Edward, Earl of Wessex and his wife Sophie, Countess of Wessex.

Additionally, all of the monarch’s grandchildren and their spouses – apart from Meghan – will also attend.

Meanwhile, the Queen’s nephew David Armstrong-Jones, Earl of Snowdon will attend, along with his sister Lady Sarah Chatto and her husband, Daniel Chatto. David and Sarah are the children of the Queen’s late sister, Princess Margaret, Countess of Snowdon, who died in 2002.

Other members of the House of Windsor in attendance in the form of the Queen’s paternal cousins: Prince Richard, Duke of Gloucester, Prince Edward, Duke of Kent, and Princess Alexandra, Honourable Lady Ogilvy.

Relatives from Prince Philip’s family will also attend in the form of Bernard, Hereditary Prince of Baden, Prince Philipp of Hohenlohe-Langenburg, and Prince Donatus, Landgrave of Hesse.

Finally, the Queen and the Duke’s close friend Penny Knatchbull, Countess Mountbatten of Burma will also be in attendance.

Delicious White Chocolate Blueberry Cheesecake, Even a Beginner Can Make