How to Cook Stunning Steaks in a Cast-Iron Skillet

A cast-iron skillet might have the reputation as your grandparents’ favorite pan. Well, your grandparents were on to something. A cast-iron skillet is a true kitchen workhorse—and one of the tasks it excels at better than any other pan is getting a dark, even crust on steak or chops. Learn more about cooking in cast iron and then watch America’s Test Kitchen test cook Lan Lam teach you how to use it to make the best steak you’ll ever cook at home.

Benefits of Cooking in Cast Iron

Cooking in cast iron is an incredibly versatile, durable, and completely chemical-free way to cook. Here are a few reasons to love it:

It Improves with Use: One of its greatest advantages is that a cast-iron pan is possibly the only piece of kitchen gear you can buy that noticeably improves after years of heavy use. As you cook in it, a cast-iron pan gradually develops a natural, slick patina, called seasoning, which releases food easily. A well-seasoned cast-iron skillet can become just as nonstick as an aluminum or stainless-steel pan and will definitely outlast them.

It Maintains Heat: Once a cast-iron pan is hot, it will stay that way much more effectively than stainless steel. This makes cast iron the ideal material for high-heat applications like searing steak. The initial drop in temperature caused by adding the relatively low-temperature steak to the hot skillet will be much smaller in cast iron, allowing for higher heat and better browning. And better browning means a more delicious steak.

It’s Virtually Indestructible: The durability of cast iron is legendary—many people are still cooking on cast-iron pans handed down through their family for generations. Cast iron is virtually indestructible and easily restored if mistreated.

It Can Develop a Nonstick Coating: Cast iron’s ability to develop a nonstick coating also makes it incredibly versatile. This is a boon for minimalist cooks who are looking to downsize their pot and pan collections to a few key pieces that can work in almost any application, but cast iron is also beloved by gourmet cooks who appreciate the particular benefits it offers for essential techniques like browning and searing. 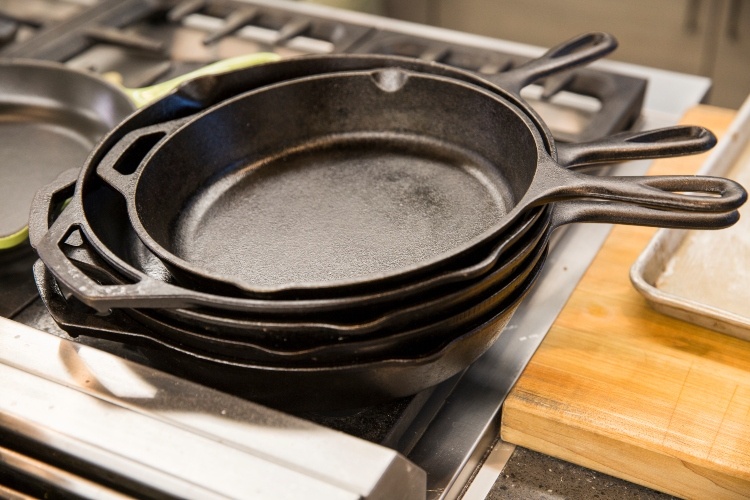 While you may think of a cast-iron skillet as one of the most straightforward, no-frills options on the market, there are actually a surprising number of factors to take into account when buying one. The Tastings & Testings team at America’s Test Kitchen purchased 10 cast-iron skillets, six enameled and four traditional, each about 12 inches in diameter, and put them through a series of rigorous recipe and abuse tests. Here are the skillets that came out on top:

This skillet came with the slickest preseasoned interior, and it only got better the more we cooked with it. It also has a helper handle, which made lifting it easy, and it survived abuse testing without a scratch.

With flaring sides, an oversize helper handle, a satiny interior, and balanced weight, this expensive but beautifully made pan is a pleasure to cook in. After abuse testing, the pan still looked nearly new.

If you prefer an enameled pan but don’t want to shell out for our winner, this skillet released sticky foods well and browned foods evenly. It was comfortable to lift and its curved sides were easy to swipe with a spatula. Our one sticking point: Its small cooking surface could barely fit two big steaks, so we recommend this pan for small households.

Tips for Cooking Steak in a Cast-Iron Skillet

A cast-iron skillet’s heat-retention properties are ideal for a perfect sear. But there are some steps you should take to get the most out of your steak and skillet.

Salt the Steaks First: This is an important first step in searing steaks, no matter what kind of cookware you’re using. Moisture prohibits browning, so salting the outside of the steaks while they come to room temperature (which helps them cook more quickly and evenly) pulls moisture to the exterior of the steaks and also seasons the meat.

Preheat Your Pan: Cast iron doesn’t heat very evenly because its thermal conductivity, or ability to transfer heat from one part of the metal to another, is very low. So instead of preheating the skillet on the stovetop, use a very hot oven. The heat surrounds the pan and will create an evenly heated cooking surface. (But be careful when handling the preheated pan—cast iron stays hot!)

Flip the Steaks Every Two Minutes: Flipping the steaks more than once as they cook leads to a shorter cooking time and a smaller gray band of dry, overcooked meat just under the surface of the steaks.

Delicious White Chocolate Blueberry Cheesecake, Even a Beginner Can Make