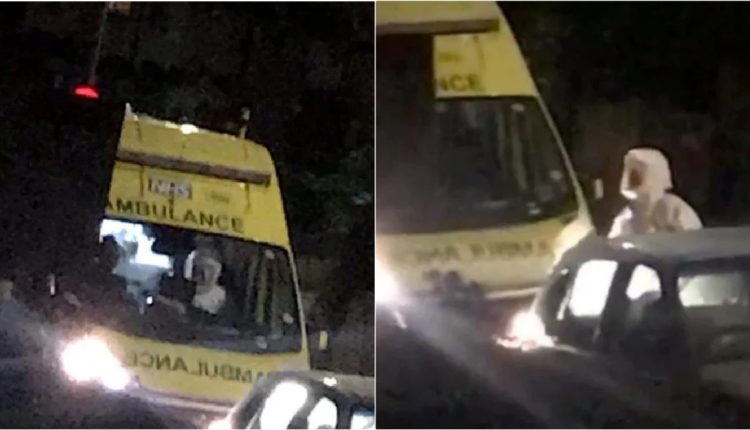 A THIRD coronavirus patient in the UK is reportedly a Brit businessman who caught the killer bug in Singapore.

The patient – thought to be in his late 40s or early 50s – walked into A&E in Brighton days after flying back to the UK.

He was transferred to a specialist isolation unit at Guy’s Hospital in London and will remain in quarantine for two weeks, health bosses said yesterday.

It comes just days after two Chinese nationals were confirmed to have the deadly virus in York.

The unnamed patient went to A&E at the Royal Sussex County Hospital in Brighton suffering a cough and fever, earlier this week.

Officials said the patient was infected in an Asian country – but had not been to mainland China, where the outbreak originated.

A health source said he had travelled to Singapore.

It comes as at least three Asian businessmen who attended a meeting of more than 100 international delegates at a Singapore hotel have contracted coronavirus.

England’s top doctor said if anyone has been to those nations recently and falls ill should self-isolate and call NHS 111.

Until now, this advice only related to people from Wuhan in China.

Chris Whitty, Chief Medical Officer of the NHS, also confirmed that doctors will now begin testing anyone showing signs of the illness, if they have recently travelled from Asia to the UK.

Prof Whitty said: “A further patient has tested positive for coronavirus, bringing the total number of cases in the UK to three.

“The individual did not acquire this in the UK.

“We are using robust infection control measures to prevent any possible further spread of the virus.”

He refused to disclose if the patient was a British national or exactly where they caught the disease.

But Prime Minister Boris Johnson’s spokesman later told reporters that the victim was a British citizen who had travelled from an Asian country, but not China.

Medics are now desperately scrambling to find anyone who came into contact with him – sparking fears they could be carrying the killer bug.

Health officials are understood to not be “contact tracing” people on any Asia-UK flight the latest coronavirus sufferer may have travelled on.

The University of Sussex, which has a large campus on the outskirts of Brighton, said in a statement the new case was not a student or member of staff from the university.

The University of Brighton also said no one was affected.

How are the coronavirus patients being treated?

Currently, there is no specific antiviral treatment recommended for the new coronavirus infection – known as 2019-nCoV.

Patients in England with the virus will be transferred to one of four High Consequences Infectious Diseases (HCID) units.

There are also two in the north of the country – Royal Liverpool and Broadgreen University Hospitals NHS Trust and Newcastle upon Tyne Hospitals NHS Foundation Trust.

Two other patients who tested positive for the virus last week in York are still being treated at the Royal Victoria Infirmary infectious diseases centre in Newcastle.

Access to these units is restricted to a team of trained medical staff who are made to wear protective gowns, face maks, visors and gloves before they can enter.

In some cases, patients will have a specially-designed tent with a ventilator set up around their bed.
This allows staff to treat and feed them without having to physically touch them.

A source at the Brighton hospital today claimed the latest patient had walked into A&E complaining of flu-like symptoms on Sunday.

He reportedly had a high fever and a bad cough, so medical staff took swabs and sent them off for diagnosis.

In the meantime they placed him in a side room away from other patients and limited the staff who came into contact with him.

The swabs take three days to form cultures so when they came back with a positive diagnosis today he was transferred to a specialist isolation unit at Guy’s.

Currently, the global death toll stands at 565 with more than 28,500 people infected across 28 countries and territories.

In the UK a total of 566 people have been tested for the virus, of which 563 were confirmed negative.

Commenting on the latest case, Dr Bharat Pankhania from Exeter University, said: “It’s a clear indication that this virus is now circulating in many countries.

“That tells us that our control containment policies of considering whether we quarantine incoming travellers will need to be reviewed, as infected people may be entering the UK from countries other than China.”

The University of York student and his family member had taken ill at Staycity Aparthotel in York last Friday.

There was speculation that the patients had flown back from China for the university’s winter graduation ceremony, which took place on January 23 and 24.

It comes as health secretary Matt Hancock warned the UK would see more cases of the lethal virus.

Professor of virology at Nottingham Uni, Jonathan Ball said: “We are at a key juncture in this outbreak and it is difficult to tell if the control efforts in China will be enough to bring this outbreak to an end.

“If not, we can expect to see the virus cropping up in many parts of the world, including here.”

And Prof Ian Jones, Professor of Virology, University of Reading, added: “It didn’t come from the two cases that are already here but came from outside.

“It has been identified quickly, it has been isolated, and in all probability, it will not lead to any further cases generally.”

Fears that the virus had spread were sparked when paramedics in hazmat suits were spotted bundling a person into an ambulance in York on Tuesday.

Mobile phone footage, taken from a nearby house, shows a paramedic in protective clothing entering the house less than a mile from the previous two cases.

Witnesses said medics took a young Chinese woman in he 20s away from the property without needing a stretcher.

One, who did not wish to be named, said the ambulance arrived at the house about 7.20pm on Tuesday and left without using their siren.

But officials have confirmed that tests on the woman for the deadly bug have come back negative.

The woman’s housemate today said: “She had a spluttery cough and was worried she might have the virus, so called 111.

“Not long after that the ambulance came and she was taken away.

“The rest of us in the house then quarantined ourselves just in case anyone had picked the virus up from her.

“We were obviously all really concerned because clearly it’s a very serious thing, it’s all over the news constantly.

“I didn’t go to work yesterday just in case I had picked it up.”

Sharon Stoltz, Director for Public Health at City of York Council, said: “I can confirm that there are 3 positive cases of coronavirus in the UK, including the two cases already reported who were taken ill in York.

“The test on the person from the Hull Road area in York recently reported in the media has been confirmed as negative for the virus.”

Public Health England revealed, as of 5 February, a total of 566 UK tests have been carried out – 563 were confirmed negative and three positive.

More than 90 Brits who were evacuated from Wuham are currently in quarantine in Arrowe Park Hospital in Merseyside.

All UK hospitals have been told to prepare secure coronavirus zones to “avoid a surge” in emergency departments.

In a letter, dated January 31, hospitals across the country were told to set up “coronavirus priority assessement pods”, which can be decontaminated after each use.

Meanwhile, Britain could ban visitors from China in a bid to halt the deadly virus.

But York Central MP Rachel Maskell has hit out at the lack of communication from health authorities about the coronavirus outbreak.

She said of the latest suspected case: “It is crucial that the public are kept informed of developments associated with the Coronavirus infection.

“I have raised this twice in the House of Commons this week and am awaiting a further meeting with the Minister.”

People of Chinese origin make up the single largest non-white ethnic group in York, accounting for around 1.2 per cent of the city’s 200,000 population.

Both the University of York and York St John University have said they were not aware of any students being treated for the coronavirus.

A spokesman for the University of York insisted the student confirmed to have contracted the deadly virus did not come into contact with other students.

A statement said: “The affected student did not come into contact with the virus on campus or in the Vita accommodation.

“Initially, Public Health England (PHE) confirmed to the University that the student had not been present in student accommodation on or off campus between the point of being exposed to the virus and being taken to hospital.

“As soon as PHE released this new information, the University informed all staff and students.

Panic as coronavirus reaches the UK with two students infected

“We understand that this update will cause concern, and we would like to stress that the level of risk remains negligible.”

Meanwhile, two Brits are on a quarantined on a cruise ship in Japan.

Drug used to treat flu in Japan is ‘clearly…