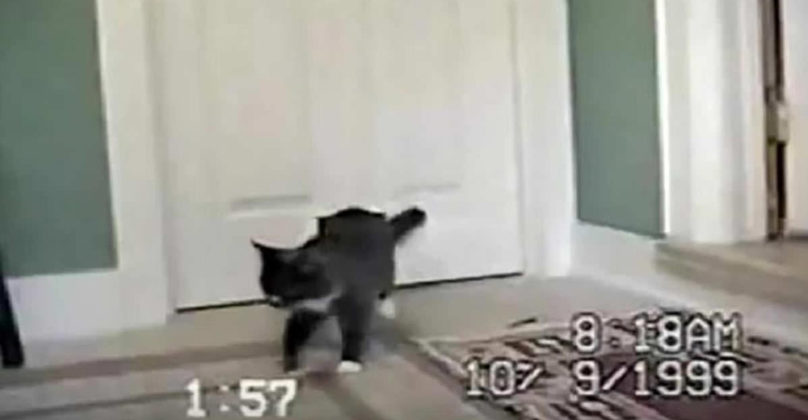 As a general rule, the cat flap in the front door is for cats.

It’s not for dogs unless they’re very small ones, and they rarely ever are, nor can they quite squeeze themselves through as well as a cat can.

So imagine the surprise of this cat owner when something unexpected appeared through the little flap!

This recorded video shows a cat walking back into the house after a long day outside. So far, all seems normal.

Nothing interesting in particular. But then, as the owner continued to sit by the door, they heard something else coming through the door. They weren’t quite sure what was going on.

The cat flap was slowly pushed open, and the most unlikely head popped through – one of a tiny baby deer!

That’s right, a fawn was making his way through the cat flap.

He pushed his way into the house and stared straight at the camera, then interestedly began to take in the world around him. Wait, what’s going on?

The house cat probably befriended the fawn while out and about on his adventures, and the deer must have thought it would be cool to follow the kit home and see where he lived!

I don’t know about you, but I’d be the one staring like a deer in the headlights if a fawn came barging through the cat flap in my door!

Woman Finds Abandoned Cat And Keeps Him For Months, Only To…