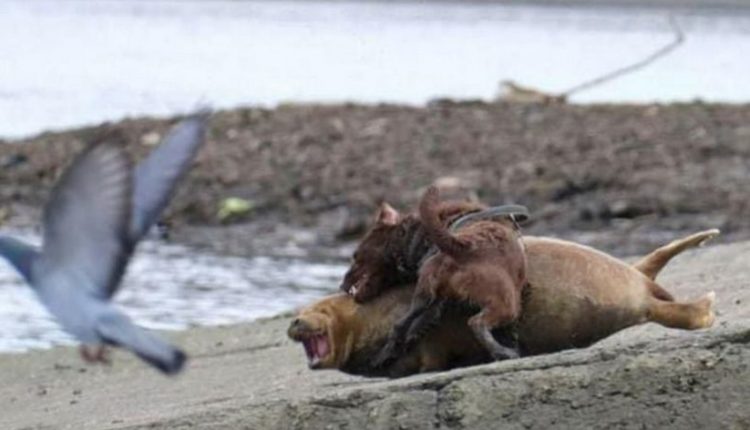 Vets battling to save an accident-prone seal pup who was viciously attacked by a dog fear he may not survive.

It is the fourth time the young seal called Freddie, who was previously rescued and made famous on ITV’s This Morning, has had to be saved – and just two weeks since his last mishap.

The ninth-month old seal was basking on the banks of Thames in west London when he was attacked, leaving him with deep lacerations to his neck and flipper.

Members of the public bravely raced to his rescue, pulling the dog away, and protecting him until vets arrived.

Today he was being treated at a rescue centre in Essex after a 40-mile emergency dash by a fire brigade boat from Barnes to Tilbury.

However vets, including This Morning’s Scott Miller, fear he may have to be put down.

A spokesman for South Essex Wildlife Hospital, in Grays, said: “It’s not looking good for Freddie. He had open bite wounds on his body but the worst damage is to his flipper which is obviously vital for a seal to survive.

“Our vet examined him, then Scott Miller has, and they’ve sent X-rays and information to various other vets to see what they think.

“But the initial feeling is it’s not looking good and it may have to be put down.”

Alan Knight of the charity British Divers Marine Life Rescue (BDMLR), which co-ordinated the rescue operation, said: “All credit to the public who went to help at considerable risk to themselves. It was a horrible, savage attack. Two people went to hospital for check-ups after suffering cuts.

“They managed to stop Freddie getting back in the water in panic because we’d probably have lost him for good.

“It’s touch and go whether the bone in his flipper will repair. We’re all hoping for the best.”

The attack, which took place on Sunday, has been reported to police.

Passing vet Rachel Kirby, a cyclist and wildlife photographer Lloyd Arnold were the first to try dragging the dog off.

Kirby received a bite on her thigh and one on her hand during the struggle and Arnold had to go to A&E with a bleeding mouth after he was headbutted by the traumatised seal as it tried to escape.

Dog walker Runa Bousquet was passing by and telephoned for help.

She said: “It literally clamped its jaws onto the poor seal and didn’t let go.

“The poor seal was very distressed, twisting and turning its flippers.”

The latest ordeal comes just a few weeks after Freddie was hauled from the Thames at Teddington Lock after a fisherman’s lure was caught in his mouth, threatening his life.

A 15-strong team, led by TV vet Scott Miller and the BDMLR, used an 80ft net and rafts as they coaxed the common seal into a lock and heaved him out.

His flipper tag number revealed his dramatic history – including his first two rescues in Europe.

Freddie was first spotted last summer on a beach in the northern Netherlands, where he was orphaned and weighed barely eight kilos. He recovered at a nearby seal centre.

He later had a brief stay at a seal centre in Calais, suffering from lungworm.

After making a good recovery, he swam the Channel and made his way up the Thames before his accident with the fishing lure.