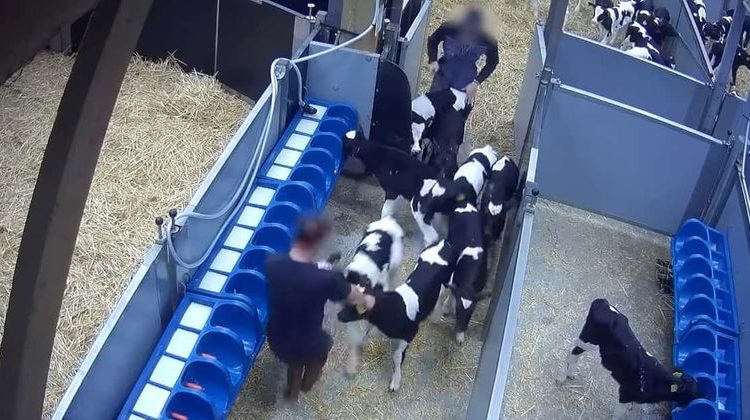 An undercover video taken at a French control post, operated by Qualivia, shows calves as young as two weeks old being beaten, dragged and punched by workers. The cruelty on livestock at the control post came to light after Eyes on Animals and L214, two animal campaign groups, authored an investigation on the problem. Campaigners followed nearly 5,000 calves, most under three weeks old, that were being transported using 23 livestock trucks from Ireland to the French control post at Tollevast where as per the EU laws, animals are supposed to be rested and fed.

The video shows how vulnerable these young calves are with most of them unable to walk or even stabilize themselves on their feet. Workers can be seen thrashing the poor animals with batons every now and then. Calves are dragged by their ears for not being to walk by themselves and are also stamped upon with the intent of harming them. Eyes on Animals has started a petition to stop the transport of unweaned calves. The calves are transported from Ireland to Spain, Netherlands or France. Ireland is currently one of Europe’s biggest vendors of unweaned calves.

Over 1,60,000 male calves, along with 85,000 adult cows were transported from Ireland to Europe last year, Guardian reported. Dairy farmers have no use for male calves and hence export them to be sold as veal. They are loaded in cramped trucks and transported via ferry in journeys that can take as long as 18 hours. The stop is made to feed and rest the calves before further transportation but firms that handle transportation are just looking to speed up the process and move them onto the next location. Despite the lush green area outside the control post, calves are not let out of their cramped spaces.

“Once in control posts, the unweaned calves, newly-separated from their mothers, are desperate to suckle on plastic milk teats. But farmworkers face intense pressure to hurry the process due to the huge volumes of animals arriving and leaving each day. This creates a recipe for cruelty,” says Lesley Moffat, the director of Eyes on Animals.

Robert Drisque, the head of the Qualivia control post, refused to comment on the matter but called it a “difficult situation”. Ironically, Qualivia is certified as a “high-quality control” post, and as a result, received EY money to expand its operating facility.

Yesterday we checked on a few veal farms. What I still find most disturbing about this industry is the way calves are kept indoors their entire lives, on barren slatted floors with nothing to do, as if they were nothing more than inanimate objects. The farm buildings are surrounded by green fields…completely empty. Oh how lovely it would be to see these fields full of calves running around, lying in the sun, exploring the novel outdoors… The dairy sector and veal sector sure have a long way to go to create better lives for calves. #eyesonanimals, #animalwelfare, #veal, #dairy

Nicola Glen, a spokesperson for Eyes on Animals said, “It is heartbreaking to see how these vulnerable animals, still unstable on their legs and dependent on their mother’s milk, undergo horrific violence during transport to the Dutch veal facilities.” Nicola Glen is also one of the authors on the investigation report. In one video, a worker can be seen throwing a calf to the ground before jumping up and down on a calf.

The video released by Eyes on Animals is now being investigated by French Police who arrested the worker seen jumping on the calf. The worker could face up to two years in jail. “The response by the authorities was fast in this case. That is good, but we haven’t seen any movement on the exports business itself so far,” Isis La Bruyère, an inspector for L214 said. “Our demand is to ban the long transport of unweaned animals because, in this transportation, there cannot be animal welfare.”

The cruelty is in clear violation of the EU’s Treaty of Lisbon which recognizes animals as sentient beings, capable of feeling pain. Groups that campaign against cruelty against animals maintain that non-compliance is a big issue and little is being done about it.