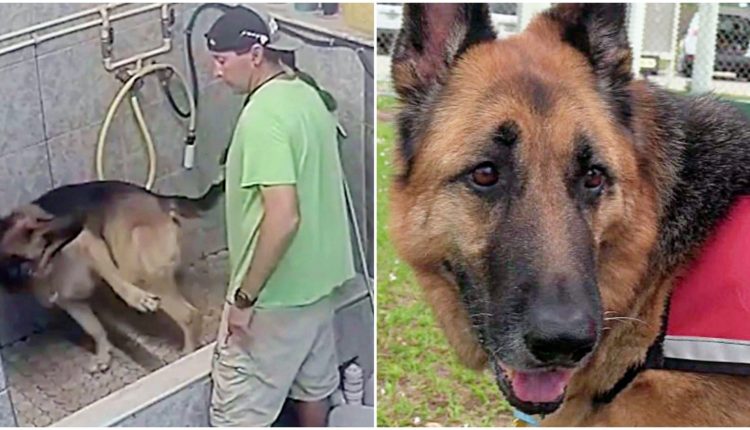 Most people consider larger dog breeds most aggressive, and treat them unkindly, but the truth is that sometimes, their bark really is just worse than their bite. In most cases, extremely aggressive behavior in dogs is caused by abuse.

For example, a careless employee felt the German shepherd he was grooming wasn’t behaving adequately, so he severely abused her to the point of breaking her tail.

The man took his dog, TT, to her appointment at Groomingdales Pet Spa in Florida, and afterward, when he picked her up, she wouldn’t respond to commands and was acting very uneasy, so he took her to the emergency hospital and found her tail was broken and needed to be amputated.

TT is a service dog for a veteran with PTSD, so the injury caused trauma to both of them.

The incident was investigated by the Brevard County Sheriff and the horrific security camera footage revealed the truth. Namely, James Suthann, a Groomingdales employee, forced TT to sit still during her grooming, and when she refused, he grabbed her by the tail and broke it as she tried to twist away. Then, he tied it down and even hit her over the head with the shower nozzle.

Suthann was fired from Groomingdales and given a $200,000 bond. The sheriff later admitted that watching the footage was one of the most difficult things he has ever had to watch during his 39- year long career in Law Enforcement. The dog has been treated in a horrific and cruel way, so this maltreatment enraged him so much, that he escorted Suthann to the county jail himself.

Fortunately, the dog recovers fast and is able to run around and keep a watchful eye out for her best friend.

On the other hand, numerous abused dogs are abandoned and taken to animal shelters without being given another chance, and they become even more violent due to the mistreatment they have survived. Therefore, there is a need for more caring people who would like to help these abused dogs and rehabilitate them.

Note that there is always an adjustment period when a new pet is brought into the home, and in the case of a fearful or abused dog, taking this time is of the highest importance.

Do not expect that things will drastically change overnight, but you will need to invest lots of time, love, and care, in order to help the dog start feeling safe and to interact. Fearful animals require additional care to help them adjust to their new home, so you might need toys and treats to motivate it, and use these items as positive reinforcement for good behavior.

You might also effectively reduce tension if you are able to identify what causes a negative or fearful reaction. Without management during the first months, the dog might become even more fearful and you will face more difficulties to build trust.

If the body language of your dog reveals fear, you will need to, back off and work slowly at your interactions. You should never push your pet into a situation where he or she is uncomfortable. Instead, leave it to take the lead when ready, and it will approach you soon.

At this point, here are some useful tips to keep aggression at bay:

Keep the dog in a quiet and comfortable place where it will feel safe and protected
Smile at your dog to show that you are trustworthy
You need to be patient and show the dog that it is loved in order to heal it emotionally
Approach the dog slowly in order not to scare it
Offer the dog lost of treats and praise, which is much more effective than punishment
Establish a routine that the dog will remember
Never yell at the dog, but speak in a soft voice