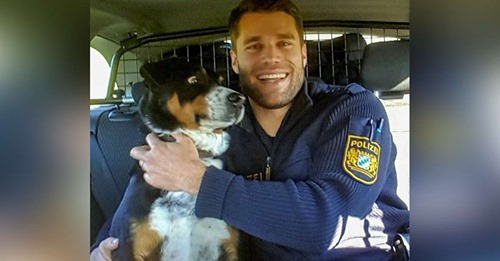 If looking for a good time is a crime, then go ahead and lock this pup up.

And in a way, police in Germany did just that.

Last weekend, the dog had managed to sneak away from home in the village of Ziegenbach, heading out for a little solo adventure. Somewhere along the way, he met a group of cyclists who stopped to interact with him.

Though the dog may have thought the cyclists would be just passing characters in the ongoing story of his free-spirited journey, he was wrong.

Concerned the dog was lost, they called the cops — staying with the pup until officers arrived to “arrest” him.

The dog was loaded into the police cruiser, where officers snapped a photo of themselves smiling in the company of their adorable detainee.

But not everyone was so pleased.

Evidently, as the dog decided to slip away from home to start his exciting adventure, he’d failed to consider that there could be consequences — and that he might end up in police custody.

When reality set in, it seemed to have hit him like a ton of bricks.

Fortunately for the pup, the police had no intention of sending him to the big house, but rather, his own house.

After asking around town if people knew the dog, officers were eventually able to get him back where he belongs.

“The dog’s owner could be found and the four-legged friend could be returned,” the police department wrote.

With any luck, having been let off with just a warning, the dog will think twice about sneaking away from home on his own — and instead wait for walk time, like a good pup should. After all, the best adventures are shared with a friend.