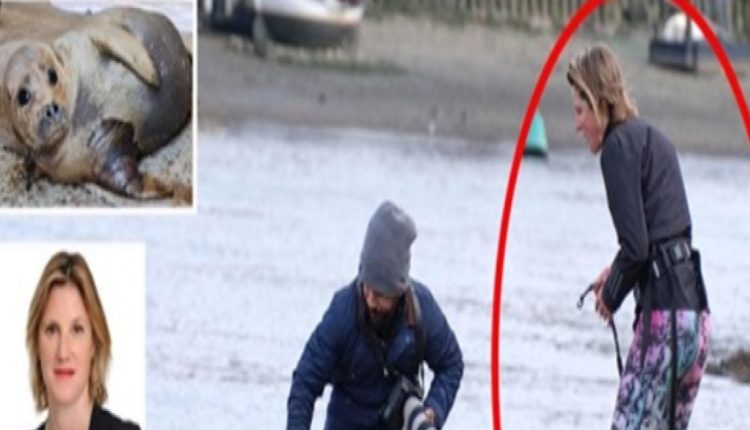 Woman whose dog mauled Freddie the Seal breaks her silence

THE Oxford-educated lawyer whose dog mauled Freddie the Seal to death has today apologised for the “terrible accident”.

Rebecca Sabben-Clare, 49, said she regretted not putting the dog on a lead after it attacked Freddie near Hammersmith Bridge, West London on Sunday.

Shocking pictures showed the cross-bred latched on to the seal’s flipper as walkers and cyclists, including a vet, rushed to his aid on the banks of the River Thames.

Freddie the seal, named after Queen frontman Freddie Mercury, was put down on Monday a day after the lunchtime attack.

MS Sabben-Clare told the Evening Standard: “I am heartbroken by this terrible accident.

“As an animal lover, I fully understand the dismay that has been expressed. I apologise unreservedly for what happened.

“In hindsight I wish, of course, that the dog had been on a lead but at the time that did not seem necessary.

“I am hugely grateful to all those who helped at the scene. They were heroic.

“I left for my own safety and that of my dog, believing that there was nothing that I could do to help as the seal was being looked after by a vet and help had been called. I offered my contact details to the vet before leaving.”

Ms Sabben-Clare also stressed she had made contact with the police after the incident, who had directed her to the RSPCA.

She added: “The RSPCA interviewed me and confirmed that they were happy that no offence had been committed.

“I tried to contact the police again repeatedly yesterday afternoon, in response to a statement from them that they wished to identify me and speak to me.

I am heartbroken by this terrible accident

Ms Sabben-Clare said she has made a donation to the Wildlife Hospital which treated the seal, and praised them for their “wonderful” work.

Her apology comes after the RSCPA said today it can only investigate offences under the Animal Welfare Act, which involves cruelty to animals.

They stressed the police must investigate offences involving dangerous dogs.

The RSPCA said: “We are deeply saddened by what happened to Freddie and this highlights why it is important to keep dogs on leads around wild animals.

“If no offences have been committed under the Animal Welfare Act we are unable to take incidents further. Offences involving dogs out of control are investigated by the police.”

A neighbour, who did not want to be named, told The Sun today that the QC’s dog was called Toby and was “not aggressive”.

They said: “I don’t think the dog is a cross, it’s a breed but I don’t know what breed he is.

“He’s not an aggressive dog, he hasn’t had any history of it and he’s super sweet with our dogs.

“He’s been super sweet it’s a shame. I think she is a nice person, it could have happened to anybody.”

The Met Police confirmed on Tuesday they are investigating the death and looking to speak to the dog’s owner.

However, The Sun understands that police have since told Ms Sabben-Clare no offence was committed.

Similar fines apply to attacks on wild animals – but offences related to hunting can see penalties of up to £5,000 imposed.

A dog is considered ‘dangerously out of control’ if it injures someone or there are grounds to fear it will injure someone.

Freddie earned the affectionate nickname after entertaining walkers on the bank of the Thames for weeks.

And locals reacted furiously after his killing, with one writing: “#freddietheseal people who own dogs that attack people/wildlife should be banned from owning pets for life, first a dear in Richmond park, now a poor seal in Hammersmith, when will it stop?

“When a child dies? Will they just fine the owner and move on? This needs to be fixed.”

Craig Oliver, David Cameron’s former director of communications, wrote: “So sad to hear that the beautiful seal that took up residence near Hammersmith Bridge had to be put down after being savaged by a dog.

“There were signs up asking dog walkers to keep them on leads.”

Ms Sabben-Clare studied at New College Oxford and was named a leading English silk in the 2021 Legal 500 Directory.

She is now a specialist in commercial law who is described as “incredibly bright” and “very talented”.

Ms Sabben-Clare was said to be “distraught and distressed” as she attempted to pull her dog away from the seal during the attack, The Times reports.

A witness added: “I think she was very upset. She was trying to pull the dog off but this dog wasn’t letting go.”

A neighbour told The Sun today that the QC’s dog was called Toby, adding: “I don’t think the dog is a cross, it’s a breed but I don’t know what breed he is.

“He’s not an aggressive dog, he hasn’t had any history of it and he’s super sweet with our dogs.

“He’s been super sweet it’s a shame. I think she is a nice person, it could have happened to anybody.”

British Divers Marine Life Rescue said last night: “We are all devastated at the loss of ‘Freddie’ today.

“So many people tried to help him but his injuries were too severe.

“Marine mammal experts were consulted but all ended with the same conclusion, he was put to sleep late this afternoon.”

A photographer who was taking pictures of Freddie when the attack happened said it was “vicious”.

“It wouldn’t let go despite repeated attempts by members of the public to separate the animals.”

The vet who came to the seal’s aid was bitten three times by terrified Freddie while trying to hold him.

A male cyclist was “headbutted” by the seal as he tried to hold him still.